In the wake of the Marseille jihadist attack Saturday, French politician Marine Le Pen has called for anti-terrorist legislation that directly combats Islamist ideology, which “wages war” on the West and seeks “our enslavement.”

As the French Parliament debates a new anti-terror bill put forward by the Ministry of the Interior, the President of the National Front Party, Marine Le Pen, has labeled the proposed legislation “shameful” for its lack of teeth, calling instead for a “great anti-terrorist law,” which would recognize a terrorist act as “an act of war,” and which “truly combats the Islamist ideology that has planned our enslavement.”

On Saturday, an illegal Tunisian immigrant allegedly stabbed two young women to death in Marseille while shouting “Allahu Akbar” (god is greater), in a terrorist act claimed by the Islamic State jihadist group.

The man’s victims were two cousins in their twenties, one of whom he killed by slitting her throat with a knife. This is the latest instance of a long string of jihadist terror acts perpetrated throughout the French Republic in the last months.

According to the Paris-based Center for the Analysis of Terrorism, France is the Islamic State’s number-one target in the West, and with some 30 percent of Islamic State foreign attacks taking place on French soil.

During a press conference Tuesday morning, Le Pen sharply criticized the existing proposal, insisting that Islamic terrorism must be called by its name and treated as the menace it is.

Later, Le Pen quoted herself on Twitter, noting: “The Islamist ideology is a political-religious ideology that has planned our enslavement and wages war on us.”

“We must never get used to terrorism,” Le Pen told reporters, adding that “security is the first duty of a state.”

During her address, Le Pen called for the “systematic expulsion of foreign delinquents” and more generally to facilitate the deportation of foreigners in irregular situations.

“Terrorist organizations take advantage of European weakness,” she said, and “the great law on terrorism should have as its aim the eradication of the manifestations of Islamist ideology everywhere and in all its forms.” 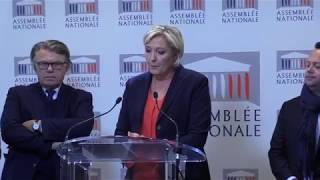 This entry was posted on onsdag, 4 oktober, 2017 at 8:03 e m and is filed under "flyktingar", brott, Invandringen, Islam, Mångkultur, PK Elit. You can follow any responses to this entry through the RSS 2.0 feed. You can leave a response, or trackback from your own site.

One Response to Identify your/our enemy!